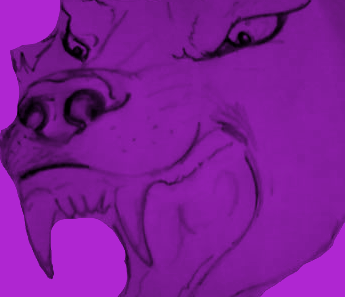 Turim refused to be carried by this… thing. This human, though she had tried to explain herself and offered help. So, she limped up the long path far behind the naked legs and strange fleshy bulbous backside, moving ahead. But her black hair, or was it brown hair… that mane that came from her head was something. Black water. Like cooling lava…

Karen checked over her shoulder to see that Turim was still following, then put her hand on the blue stone pillar and stepped down into the temple proper. High above, and Turim was not inclined to crane her sore neck and shoulder to see it now, were the rows over rows of arches at its front. Wyldehounds built their temples right in the forest. They did not clear the trees from around… Turim could see herself as Karen, wandering through the human world as if it wasn’t something… something wrong to take down that many trees to put up a building…

It was the fur and scale neck of the greatest Howler there had been, among the blue cold-hides. High Howler Hyurinihm. Father Hyur. Hyuuuuur… if you were talented enough to make that noise. But the tinge of pride cooled off. Turim focused on Karen and the strong scent of Wyldehound, living breathing kindred she sensed in there. They were going to rip her to shreds and Turim wanted her bite too. Couldn’t wait to see that bitch ended. Turim could also remember from her dreams, that humans didn’t smell well, so of course she was fine with Karen leading her ‘to the others’ as she’d said it. As if she cared, as if any of them would ever really help her.

But when Turim arrived, Karen was seated next to the current High Howler, Kiyuu, a powerful old red hound. She was putting one of the sacred furs around her shoulders. Anger dulled the relief that should have come, that there were other survivors along with the human woman.

Once Turim was safe in the circle, Karen did not look at her anymore. There was a weak fire in the pit. Cold-hides didn’t like for it to be so hot. The blue stones and crystals that had been pulled by teams of dogs inside the round temple were arranged in a spiral. The outer ring, where the other hounds sat and rested, and then the inner arc that raised up above the fire pit. Several offering bowls sat on lower rocks west of Howler Kiyuu and Karen. Where the spiral should have crossed Turim’s path, the rocks were low, smooth and polished. Easy for a Wyldehound to see and step over. Turim, other than her fury being checked, was hurt that no animal in that place came to her aid… but when she limped along to a resting place by the fire (she was still eager to bite Karen sitting so near to Howler Kiyuu if anything went wrong), Turim noticed that the other animals were sick or suffering in their own way. Long ago, Wyldehounds had scratched symbols for the stars, the moon, and in praise of ice, water, rain and all its gifts into the stones.

The big red dog showed his teeth, an effort at a smile in the middle of all this. “When I saw that you were coming, I had a little hope that you would fetch yourself here without injury. But, as see around you, very few of us were such lucky dogs. And I was already here doing morning rituals when the survivors began to arrive.

“I should have come through the north gate.”

“No, your instinct was right to drive you past what you were taught. When the thing landed, it destroyed the safest route up here. Remember that in the days to come. A dog can’t always obey can she?”

“No, she shouldn’t.” Karen said, and tugged the brown fur high up over her naked shoulder with a finger.

Turim growled at her.

“Turim, the woman who saved you is not a woman. You don’t recognize sister Mayja?”

Turim instantly hated that name. For some reason, going back… she realized then it was because Mayja had been her old howling school teacher.

“Yes, oh. I’m stuck like this, in this horrible skin coil.” She shuddered with disgust.

“I’ll forgive you properly when all our animals survive this. But look at all the ones who are here… wounded, broken. I think they meant for the probe to crash and hurt us. But their wretched howling had been going on for years before. We never listened.” Then, she turned on Kiyuu, “You never listened.”

“I can never apologize to you enough, Sister Mayja. Or to our own animals—”

“I have work to do.” Karen swathed the fur tighter about herself then stepped down to the large stone dish by the fire. She found a cup, tried to touch it and swore, or take it up in her flat teeth by the hide handle. At last, Karen made a face, and carefully pressed her hand and an edge of the fur against the cup, then did the same to the large dish from the other side, tipped the hot water so that it poured in, rather than dipping it. “These pour beast can’t walk or bring their bowls as they rightly should… and we must keep up their strength, for whenever the time comes.” And Sister Mayja went and poured fresh warm water into the bone tea that Turim could smell now. Everyone had a dish of old bones. No food. Mayja went back and forth, trying to fill everyone’s dish as best she could on wobbly legs and with awkward skin-hands that couldn’t even take the heat of a tea bowl.

Howler Kiyuu’s robust voice raised above Turim distracted by the strange human at work. “I will tell you now, if you are ready, Turim.”

Turim whined and put back her ears. Her icy breath chilled the edge of stone beneath her paws. Many tiny silver icicles.

High Howler Kiyuu barked for her to get back up. Once, sharp, and a blaze that ignited his whole hide and bathed the sad place in yellow. This snapping, confident conflagration that licked high to the icy blue temple dome above. Orange eyes simmered in their hot focus on the little blue dog and demanded her obedience.