I am a nature lover, and many of my multicultural fantasy fiction stories also feature amazing animals. There are romance, adventure and spiritual novellas, quick shorts,  inspirational essays, bedtime stories and a comic strip that are all free to read.

I love to write, a lot, and there’s puh-lenty to read here. Every few months or so, I take a break from what’s currently on tap and pick back up with another story in progress. (A lot like PBS only showing Downton Abbey in the winter.) So please do check back for updates to your favorite story.

* A star means that the story is still in progress.

Love so sweet it stings the inside of your cheek or makes you feel really glad that you’re still single.

A Day In the Life of Odeon, Lord of Beasts
Odeon, the evil Lord of Beasts, is a were-horse who moonlighted as the greedy horse-god of Jyst for thousands of years before that human kingdom fell, and has won dubious victories over the animal kingdoms since. Though, hate humans as he might, Odeon secretly longs to be one. See what happens when the innocent apple merchant Grace finds herself with this charming (and hella-weird) were-horse for a lover.

Animals
If you don’t use your humanity, could you lose it? Harmon and Carmen are struggling to keep their fake marriage and friendships together. But, this plastic band of backstabbing friends are about to discover what real savage beasts revel inside their human bodies.

Her Hand
After decades of marriage, Siuta is now convinced that his wife is an evil creature who seduced him and stole his youth. As Maera watches her deluded husband slice open her hand, swearing that it is a claw, a deeper beastial power overwhelms her.

There is something about grabbing all your best things and running off into the woods to have that one great big adventure.

Featured: The Cull Sow Queen*
When King Vael’Kellen abused his queen before the entire country and called her a pig, he only provoked Vanuva to rise again, as a vengeful demoness.

Carnivory: The Art of Eating One’s Self*
Egotistical Frank Hearwynn writes himself and his romantic obsessions into his novel, but its dark hero, Rhune the wolf, resents the tacky narcissism that is suffocating his realm. Carnivory is novella-in-progress explores what happens when a brilliant beast makes his move against man in order to survive… not in the wild, but in a struggle over whether a wolf or a man will finish a story.

Emperor San’ur Crush*
San’ur Crush the Deer Emperor and Captain Jamie of the humans’ Hunter Rebellion find themselves caught in an age-old struggle between species violent about survival. But now planets, an entire galaxy is at stake. Liyane stands between them as easily as a doe in the clearing. Which kind of life will she choose, the path of a huntress or the hunted?

Jawbreak Blue*
The apocalypse came and went in 2012, as predicted, and it’s harder than ever to get out and see a Redskins football game in Washington, D.C. Two Black D.C. natives make the long journey only to make a heartbreaking discovery: the rest of the world outside the Nation’s Capital seems to be doin’ just fine. A story about a boy, his shotgun and his “just friends” girl wearing one bad blue dress. Story in progress.

Phobos Xo Robobos*
A young Black boy leaves home to find the family’s lost demon dog. But Kash is the exception to the rule in a fantasy world ruled by wimpy, kind magic. His swagger, his smirk, the powerful runes woven tight up in his cornrows… only remarkable Kashizaerian, and his growing band of wayward friends, can save everyone from that little, lost -very evil- puppy.

She’s a Mean Old H4 Bus*
Anyone who rides the H4 bus through Washington, D.C. will tell you it must be possessed or something. When all of Marlin’s meanest riders get on his bus one day, and she rattles and shakes like mad, Marlin knows he’s about to guide each of them through a terrible journey.

I love writing about religion, human spirituality, becoming who you are, losing faith in what is or needing a belief in so much more. Knights swear to be virgins, medieval women feel modern, and high priestesses win over crowds with with Maury Povich style prosthelitizing. A refreshing reminder that finding deep meaning in life is not an old story at all.

Damsel: Once Upon a Time When I was Catholic*
Beyond the damsel and knight caught up in their epoch struggle as medieval frenemies, the Unicorn Archbishop of the Kingdom of the Grand and Frivolous Effort is trying to hold his holy bastion away from the Rapture together. This amusing and meaningful novel-in-progress explores answers to my own ponderings about religion.

What Inspired Damsel?
This amusing fantasy novel-in-progress explores answers to my own heartfelt ponderings about religion.

Aisha: The Celestial War*
While Zyrcon is goofing off, the Elphanti tribe’s smallest baby elephant, Aisha, is slain and Zyrcon must grow up quickly to find her killer. Cast out, the lonely prince must now journey through the Jungle of Life: endangered tribes of people and animals, feisty jungle princesses and even Aisha’s own wrathful tantrums from the spirit world. All to reclaim his throne.

Mi’Raah
High Priestess Naah Maah Mi’Raah of the sea finds herself shackled to a young prince who’s always wanted to be a pirate. And she’s about to grant his wishes at the expense of other lives, as she stands on the verge of destroying another god’s realm, the great horse religion. When Mi’Raah, a slave, has lost her own faith, will she strike curses or work miracles?

When Red Expands (Part One)
Could there be a Wyldehound clawing and growling beneath your human skin? Designed as a series of bedtime stories, When Red Expands is a stream of consciousness about a man and a woman fighting down uncontrollable, even animal urges to be together. Have you ever had the feeling that what you truly, very badly needed to do to another person in the dead of night, was exactly right?

When Blue Envelops (Part Two)*
Karen Jung’s body has shut down and betrayed her. Powerful instincts have let her enjoy one man, only one mate in her whole life. And now that Brandon is gone, the need is destroying her. It’s as if she’s not even human… and then Mistress Turim wakes up from her nightmare, on the planet of the Wyldehounds.

Some of the most ridiculous stuff you’ve ever wished someone would not write a story about.

A Snowball Fight in Mount Pleasant
Tim finally throws a snowball across the fence at his crochety old neighbor, but it is the start of a warmer friendship than the chilly streets of Washington, D.C. could offer in any season. (Better yet, the whole thing takes place in Mount Pleasant.)

Be Good. Be Food.
Having a bad day? Let’s take the notion of ‘comfort food’ to the next level.

Brunch in Mount Pleasant
Phryne the crow and her best girlfriend Blanca the crane have a zoo brunch that’s hard to forget.

High School’s A Zoo
Georgina, the gold-skinned, tall, leggy (and sometimes fuzzy) teenage spokesmodel for a famous makeup brand, has a terrible secret.

May the Asses of Unicorns Guide You Always
An inspiring essay about a really horrible photoshopped image of donkeys at the National Zoo.

Ninja Cows
The Shenandoah Strangler is at it again! Can the ninja cows at the National Zoo’s Kids Farm handle this final showdown?

Pachacamac: Of Fertility and Death
A young doctor is overwhelmed with treating a terminal patient and re-ignites a heartbreaking affair with her old Wellesley professor… until a peruvian god intervenes.

Paperclip Safari
Follow the adventures of the Stripey Link Clan (of paperclips) through the wilds of Washington, D.C.

Reindeer Intervention
I had to write a story using the words cigarette, fungus and quadruped one day… and it went too far. I apologize to the internet.

Inspiration and bitch-spiration: enjoy essays on how well the little things, in writing and in life, can keep us going:

Bitch-spiration (It’s also okay for us to vent.)

Where do your pets go when you’re away from home? Well, your cat at least, is hopping on the Tiger Line METRO and heading to Cat City, where there’s a city-wide naptime every twenty minutes, cat celebrities like Sullen Cat and Catty Perry strolling the streets, and all the friskies & chips a kitty could handle. 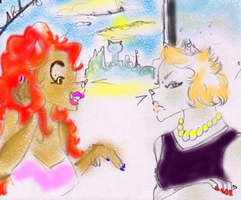 Fanchesca Feline Kitty had her purring face on every notebook, pencil case and carpet steamer back when she was a kitten. But now that she’s grown (and kind of washed up), fashionista F.F. Kitty wants to make a life for herself. Watch Franchesca dodge hipster alleycats, the Cat City mob, catgirlfights with her best friend Fluffy, and ultimately, her new responsibilities — while she learns there’s more to a good life than being cute. Read the comic