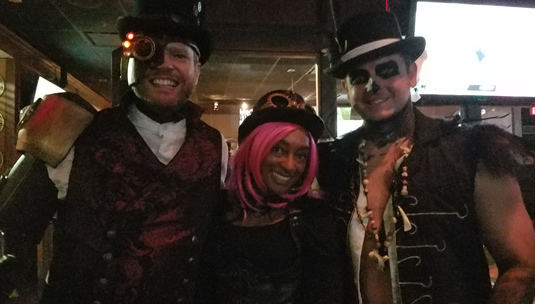 Another tip for creative folks who need to stay inspired: become a fan of Steam Powered Giraffe. NAO.

Working hard to get your novel, your new business, any of your dreams off the ground is exhausting. There are many times when you doubt yourself and you want to give up. And sadly, a lot of us, for various reasons, find that we have to be practical and let go of a project that isn’t working. But don’t ever forget, there’s always something else you can try.

My favorite band, Steam Powered Giraffe, made the great journey from being an improv group busking in San Diego, to making national, and then international tours to share their quirky music and ingeniously executed rock opera robot mime act for a growing fanbase. Sound strange? Well, it is wonderfully strange when you let someone’s unique vision find a way into your heart. When an artist presses on, no matter what anyone else says, evolves and adapts to adversity until finally, strangers can see into their mesmerizing world… it’s like tasting wabi-sabi. In your mouth. What a brilliant sensation.

By the way, that’s a picture of me cosplaying as Rabbit from SPG in a last minute Halloween costume. Pretty good, considering how elaborate her adorable costume is and how little time I had… And those handsome steampunked strangers are people I hope I converted into SPG fans-fo-life. We’ll see!

So go on and take a bite. (Cue Rabbit’s chomping down sound-effect.) Watch the music video A Way Into Your Heart, become a fan like me, and check out more links below to some of SPG’s best and funniest work. I’ve been a fan for months, so don’t worry, I’ve hunted up the best of the best. I had to do it. To be perfectly honest, I feel like my life, as a creative writer and as person, has changed since I found SPG’s positive music.

Why You Should Fall in Love with Steam Powered Giraffe Too

One more thing… this will sound strange, less strange if you consider that I am a huge SPG fangirl, but I believe that every creative person out there should become a fan of this band and join them on their journey. Not only is Steam Powered Giraffe due to blow a hole into the mainstream music scene any day now, because everyone in their act has the collective voice acting, singing, visionary, performance and technological prowess to rival any major celebrity you can think of, but their self-promotion strategies are hella shrewd.

Here’s an example that’ll blow your mind–Kanywe West, (hang in there, I’m going somewhere with this) as talented and successful as he is, it might never occur to him to connect with his fanbase as efficiently as SPG has, because SPG really knows exactly how to leverage technological trends to their advantage.  Don’t believe me? Can you go to Kanye West’s website, read about the lore behind his musical act, sign up to support his band with a monthly subscription, read his comic book, get your own animated pet, watch him play video games in real-time, as well as get special access to member-only livestreamed podcasts?  SPG has done with their fandom what smartphones did to cellphones. What Tesla did for cars. Most celebrities just post on Facebook, Instagram and tweet, etc. But SPG has taken things beyond the mere social streams. (I’ll take my gilded monocle off now.)

Sure, it doesn’t make sense for every musical act out there to have a fictional backstory, but that SPG knew their fanbase of anime watching, DeviantArt making, video game playing, fantasy reading fans would love precisely this kind of interactive experience (and that SPG may have pursued this instinctively on their own, just for love of their craft) shows they are well-positioned for mastery of their musical genre.

I could go on about how spectacular this band is, and I will, in a future blog post—but let’s get to the yummy links I promised.

The Bennettarium
As David Michael Bennett (The Spine), Sam Luke (Hatchworth) and Isabella Bunny Bennett (Rabbit) alluded to in their insane Halloween episode, The Bennettarium podcast is like an aquarium where creativity is fostered into something hilariously epic. This silly weekly podcast is so very much fun and I always try to listen while I’m working. They livestream on Sunday afternoons, and I believe you can even watch them too, if you’re an Engineer-eteer.

Over the last few months following this podcast, I’ve been able to stay on the cutting edge of what the best geeky TV shows and things are out there, random stuff about piercings 🙂 , and learned a lot more about all the video games I wish I could play, including, what else but… virtual reality games. By the way, they have a new band member since Sam Luke moved on to pursue his own musical & creative dreams: the talented Bryan Barbarin (Zero).

SteamWorld Heist
Hells-to-the-yeah! Their music was even featured in a popular video game that you could download and play to-dizzay if you so desired.

Battleborn Song “Montana”
While writing this post, I noticed they have music in yet another video game… and now I suspect there may be a few other games out there. I’ll let you know if I find more.

SPG seems to make a point of keeping their YouTube presence healthy, so there’s something tantalizing every few weeks, it seems, if not more frequently than that. As you watch, keep in mind that (I think) they do all of the audio and visuals that you see, on their own. Just to give you an idea of how freakishly talented this act is. They really are making this thang happen for thems-selves.

Brass Goggles
Never was a steampunk themed song more catchy. I can just feel myself in the lounge of an airship, sipping Earl Grey and nodding along.

Clockwork Vaudeville
No music video I can find for this one, but it is hands down my favorite SPG song because it is the cutest, shmutest song in the universe! I can see Mark Twain rocking out to this one.

Automatonic Electronic Harmonics
I’m not the best at guessing musical genres, but I’m going to give this one a shot—it feels like a 70s rock ballad to me. The shot of their faces against the black background evokes Bohemian Rhapsody.

Malfunction
I have a lot of praise for this video for being so unifying, especially with its empowering and positive messages from the transgender community.

Diamonds Cover
It sounds like a lot, a lot, of people have little crushes on The Spine and his incredible voice. All the current and past members of the band have insanely awesome voices, but the skill is very apparent here.

Soliton
I can see the entire cast of The Big Bang Theory sitting on that couch with Sheldon leading them in, “I’ll keep you moving like a soooliton, a soooliton, a sooolitooooon…” So, why hasn’t this happened yet?? Fire Fire would fit well on that show, too. I should so write Sheldon a letter!

Fancy Shoes
Now you know why I quoted this song on the front page of the blog for months. (And then brought it back.) Man, those were good times.

The Quest for the Eternal Harp of Golden Dreams Film
Yes. They made a movie. That I binge-watched for hours, breathless with laughter. After that was over, I was very sad they didn’t have their own television show, so I could binge-watch that for even more hours.

The Steam Powered Giraffe YouTube Channel
And so much more yummy, giraffey goodness… there’s far too much for me to list here in this blog post.

The Steam Powered Giraffe Website
Time for you to sign up and become an Engineer-eteer. Normally, I’m really frugal, but now I’m gonna do it!!

Welp, to wrap this all up, I’m going to quote another of my favorite YouTube stars… As Liam Kyle Sullivan (from Kelly’s shoes, shoes shoes) says, ‘These guys are fucking rad.’