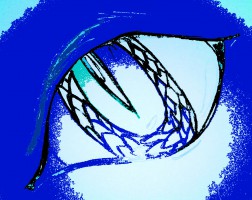 When blue envelops, it tightens around your chest. Winds tight around your throat and you can’t breathe. You remember that time… you said exactly the wrong thing to him, sweet him finally opening up to you, then he sneered, then he left you. And he was right to.

You were being a bitch and that broke his heart. The men, they don’t cry. The males, they try not to. They push you away, really hard, as if they want to resist hitting you back, when you’ve hit them first. They run and they duck their heads as if they’ve been struck.

Your waist, cinched. Cobalt, going purple, seizes around your wrists too, tight. Throwing your elbows, twisting against the ribbons, being pulled. Rope burns across your breasts, you’d fight so hard to get out of there, the choking blue. This thick ink you’ve got for blood… and now the night world is so dark, you’re drowning in it. You open your eyes and it’s pressing into the corneas. Blinking hard, quickly, again and again. Get it out. But the ink is getting in, still. The oil slipping up your thighs, and in, under your arms.

Karen kicks out, takes a breath, and gags on so much blue.

Her sheets are blue.

No, those are her scales, as she stands up on the violet plain. As she snuffs the morning air and sees the gold mist escape from her pointed nose. Her nose, her scales, those are blue…

This Wyldehound yawns and blinks back sleep as she recalls the reds and golds of her planet. Its sky and its trees… she leans down, licks one big taloned paw clean. She tastes the dirt again, swallows, and with that next easier breath she remembers that she has always been Turim. And Turim flicks an ear of a tick or something. She sits and scratches her hindpaw deep behind one long spade ear. This Karen… thing. That’s lately been an itch. She’s just a bad dream.

Now that I am awake… Time to hunt or drink… what else is there in life? Oh, yes. Find Master Baruther and mate. A lovely, purring chuckle.

Turim walked her four blue legs in a circle and sniffed the ground for him. A whine deep in her throat and through her sharp nose. He’d left her side, maybe ages ago… well, time for food anyways. They’d eventually cross paths in their hunting or patrolling the territory. They were always finding found one another.

The territory of Mistress Turim and Master Baruther wasn’t very large. They were just starting out. Once the pups came, or better yet, once they were both sure pups were coming, better not to wait that long—the pair of them would go out and battle for more space. From the head of the creek down to the rock ledge called Creek’s Head, that was their little home for now. Wyldehounds would eat anything, so the sparkling green creek fish, fur worms writhing deep beneath mossy rocks for you to dig them out, juicy tubers, or even stray sickly calves… anything was supper, so they would do alright. But to raise a pack of warriors, you needed to get in the way of a herd and its watering hole or its grazing ground.

She and Baruther worried about that and grunted about it to themselves late in those evenings when they happened to be together. She’d get up, stalk past him and drop another stick onto the fire with her mouth. Keeping the tail low and the ears flat so that he couldn’t guess how angry she was. And Baruther, he didn’t show so many teeth, kept his muzzle neat and closed so that she wouldn’t think him disappointed. Of course there was love, but where were the puppies they both wanted? Good bloodlines. Good land their alphas saved for them. And good weather this year. Not many ice storms… but no pups, none. Across the creek, into the Veld, there were herds and herds getting fat on good grazing land, and even trapped by the melting ice, just waiting to be snatched. But, the two of them weren’t strong enough to take the deer alone. For that, they needed their own pack, not just to take the deer down, but to fight across their neighbors’ territories to do it… ugh… But, they’d taken rites together to do just that. To have a sweet little life of their own.

But, young and beautiful as they were… and for all the sparkling they carried in their blood and bodies… Turim so good at icemaking that if she stood too long in the dirt, the ground would freeze, and Baruther so good with fire that flickered between his singed scales…

Each year, there were 730 days of the planet heating up from its winter slumber. There was only so much time before Draenia neared the sun again and the land began to burn. They’d all be deep in their dens by then, all the animals. Well, the herds and how they survived was more wondrous sparkling… some kind of amazing mystery. The Wyldehounds had seen enough generations on their planet to finally stand up on four feet and think about all that… gargantuan, majestic bucks and does caught fire and stood on the plain, proud and burning each year at season’s end… how did they propagate again after the firestorms and the icestorms and the melting-time coming once more? It was the melting season now.

Well, there was one very strong theory. And wasn’t it Baruther’s father who finally put it convincingly enough for all the thinking packs? Spores. Herd-deer released spores when they burned, not unlike some evergreen trees that need fire to release seeds from dropped cones. The tiny spores survived under the ice, which is what turned it pink during early melt… and they grew exponentially, several years’ worth of putting meat on themselves after one month… their deers’ lives were, in actuality, very brief. And when this ice melted, during the time that the Wyldehound had to stay beneath the ground, there were tiny deer running around, mating, rivaling… all the size of fleas. And by the time the ice was really melting, and the Wyldehound was ready to emerge and hunt again, many of the deer had grown to the right size. But then, almost seven-hundred days later, the large deer would stand, in a world gone too red from sun. Their six cleft hooves and their twelve antler tips would begin to spark. Wyldehounds would gather in their packs and watch at the height of summer as the majestic creatures easily raised their heads from grazing, as if they’d known all along, and now for the greatness of Wyldehound society and its stories, the dogs were sure that the deer did know—that they would suddenly ignite, stand burning until night fell. Not a word, not a grunt nor complaint at all from the deer… but ready and very willing to become ashes and spores. Then, in another month or so, Draenia would get intensely cold again, and the Wyldehounds would work together to dig out their winter dens.

At the end of this year, the Wyldehound packs would gather again at Stone Temple to decide what the deer should be named, now that they understood.

What a wonderful, curious world! And her pack were fast learning all the amazing secrets of life itself on Draenia. Then why had Turim ever dreamed that she was anything different? Why would you want to be different than a great, ice-blue dog?