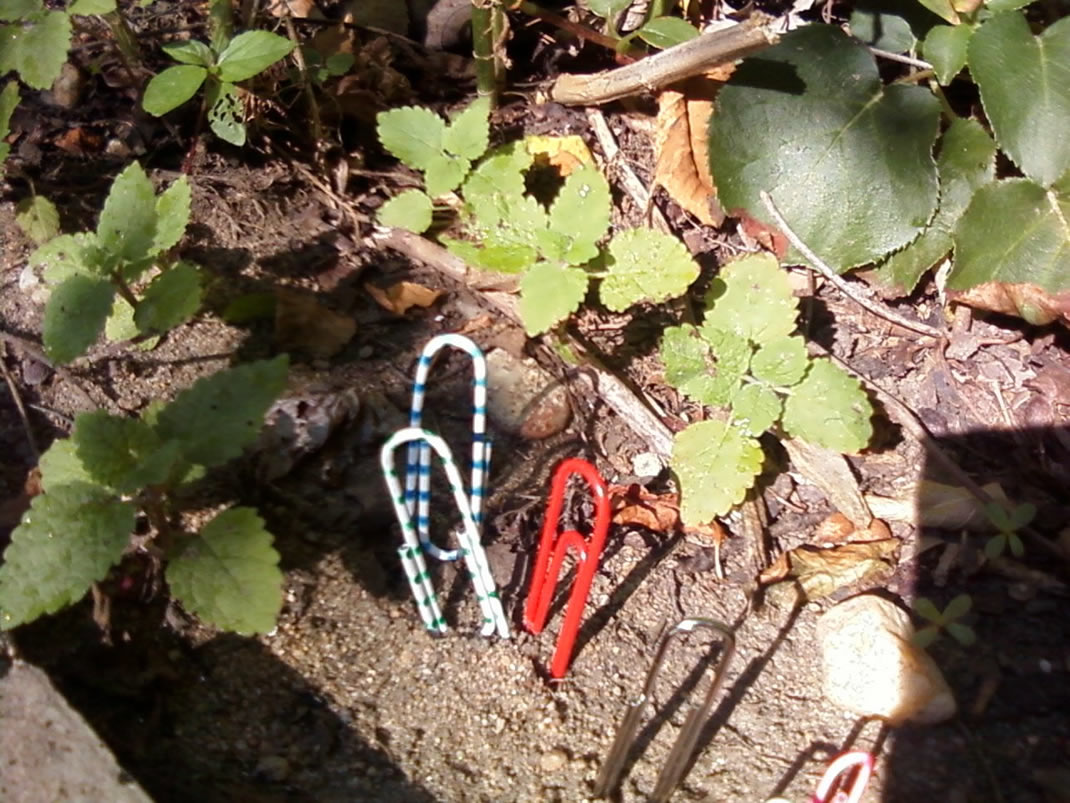 Our photag, who wishes only to be known as She Who Fears Public Ridicule–I’ll shorten it to Valerie–has tenderly named this family the Stripey Link clan.  I suspect it is for the two adolescent paperclips with vibrant hides and similar mischievous personalities.  The Silverback of the family is as noble as he must be, their mother behaves near to her strawberry sweet color as well and the babes scuttle along playfully, but the adolescents often challenge the family dynamic with silly skirmishes or practical jokes. 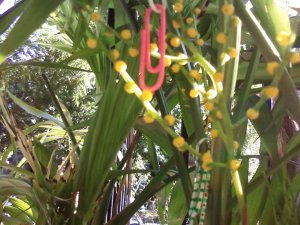 The adolescents must wait their turn, while the cliplings feed. For having this omega status, perhaps their sire is not the current Silverback? In a plentiful time, one senses an aura of tragedy…

In a strange picture Valerie showed me, that might have upset so many animal welfare organizations, the Stripey Twins had fastened themselves to the laces of Valerie’s tennis shoes and gone for a ride, flipping up and down the street and in the grass too, much to the horror of the alpha male.  Valerie carefully plucked them off and returned the twins to their family, but the diverted show of adolescent aggression was not missed by their alpha parents at all.  The Stripey Twins were later observed being kept strictly at the back of the herd by exhausted mother Strawberry, as punishment.  When will they be turned back out into the wild world, as the rogues they are?  We hope it won’t be too soon!

But, as summer temperatures continue to rise in Washington, DC, the Stripey Link clan has found itself making longer journeys in search of food and water.  In time, this brought the silver male Titan (named for his scarce tolerance of the Stripey Twins he seems very dismayed at having fathered) and the rest  of the paperclips, to a dry grassland.  There seemed to be some sweet clover-flowers around and not much else worth nibbling on.  But the tempting scraps, the clan soon found, were not unguarded!  Strange creatures emerge:

Titan is a seasoned Silverback.  He sees the lone den of pin-cubs first, then immediately prepares for an attack by their parents.

In sequence, the photographs make little sense.  A skirmish started then ended itself like lightning and Valerie scrambled to capture it.  Some other small silver creatures appeared before the dried clover, there was a brief stand off with Titan undoing himself to reveal one long, bright fang–which we hadn’t known paperclips were capable of!  The remainder of the Stripey Link clan then ran off, just as Titan threw himself at the enemy, and completely alone.  As they tangled–literally–six enemy Pinnius Safteyus were counted, including two cubs nested near an anthill.  These tinier ants even came out to watch the amazing silvery struggle.

And so, we have at last identified one enemy of the Paperclip–though it is not yet clear whether this was a case of the Stripey Link clan stumbling onto the nesting grounds of highly protective Safety Pins (and now you know where the ‘safety’ comes from), or if the Safety Pin pack were out hunting and then glad to find easy prey wandering so close to their den.

Five of the safety pins, even the two pin-cubs, bare their sharps fangs at poor Titan!

All that is certain now, is that the Stripey Link family have separated over the skirmish.  Titan’s fate against so many is yet unknown, and if the Stripey Twins are matured by the experience or resentful at all, then they may seize the opportunity to rise as alphas, themselves.  The two could be swinging in the trees to strengthen lanky sinew forms and shed bold stripes in favor of a grown male’s proud silver-sheen, as we speak.

If so, then does this suggest cannibalism among paperclips?  We cannot be sure of whether paperclips are, in fact, their own greatest enemy, until Titan fights his way back to his red mate and their cubs, and through a harsh metropolitan wilderness!