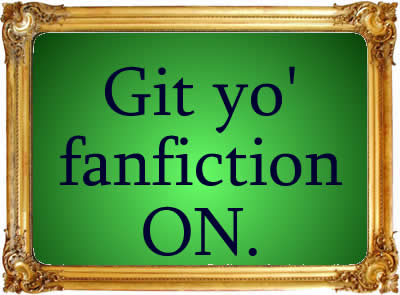 Welcome back to Kylo Ren-inspired fanfiction-writing time! Okay, I lied about the “emo” part. Eventhough the Twitter handle Emo Kylo Ren is pretty entertaining, your first fan-inspired story does not, I repeat, does not have to be at quite that level of annoying… Mainly, because the genre already lends itself to annoying fangirl/boy tendencies. (Don’t believe me? Oh, you’ll see…)

So, how do you write your own fanfiction story, sans said emo-ness?

In the previous post, I talked about planning your first fanfiction story for a favorite movie, television show, video game, etc.: motivate yourself; pick a place to start from in your favorite series; stick to the actual events in the series (at least to begin with); and as you plan how to write it, avoid alienating your readers. All important tips for being successful in the fanfiction universe—and these are also good tips for planning any story. Where you don’t want to alienate fanfiction readers by avoiding the actual events and characters in the series they are familiar with, you don’t want to alienate readers of normal stories by having places and people appear in ways that don’t synch with reality either, because you’ll cause your readers to ‘pop out’ of the reading experience and lose interest.

Now, some things to keep in mind as you draft those first few chapters…

Now, I think you’re ready to go. I highly recommend www.fanfiction.net for publishing your first fanfiction story. Use a pen name to help free yourself and push past what you would normally write if you knew everyone on Facebook was watching. Good writing involves taking risks, and you don’t know how far you can go until you go there. I think every writer needs that kind of safe space when they start out.

Also, on websites devoted to fanfiction, there is already a healthy audience of readers and novice writers waiting to enjoy something about their favorite video game/tv show/movie and if they love something or hate your work, they’ll comment. And, all that feedback is good for you if you want to become a good writer. Trust me.

If you never get any feedback, don’t worry. At the end of the day, you matter, and the fact that you’re writing matters; not that people are reading your story and choosing not to comment for whatever reason. (They probably don’t know what to say or just smile to themselves and click the window closed when they finish and go back about their business. It’s likely not about you.) The hardest part about writing is just ‘coming out of the closet’ so to speak, so taking that first step is something to be proud of in itself.

Oh, and by the way… Now that you’ve become a writer, welcome to the dark side. 🙂 Thanks again, Emo Kylo Ren!