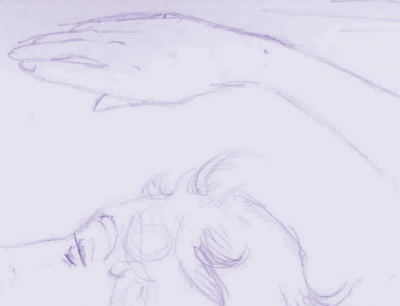 Siuta uncurled his wife’s fingers from around the sugar packet.

“This is only sugar, this is only what I want to drink, what is wrong with you?”

She now used these swollen, worked hands to make fists against her skull.  Maera began to cry and cry that she didn’t know any longer.

“It’s bullying, that is what this is.  You always ask me what more do I want, you make me go and get bread from the refrigerator with my dinner when I couldn’t want that.  You ask me if I want a knife when I don’t need it, you tell me to go back and put gravy when I don’t always need gravy on my chicken!”

“Siuta, it’s our dinner, it’s supposed to have everything.”

He calmed his voice.  Siuta scratched white stubble along his jaw.  “And this is only tea.”
Maera shook out her hands, leaned over and turned up the television set.

“I am not.  You said that I always asked you and so now I’m not asking you and now you don’t want that.  You can’t do that, Siuta.”

They were fine.  Their walls were orange.  The smaller fold-out table their daughter had left for them after she graduated college had a red cloth over it, edged in many balls of fuzzy decoration.  When it wasn’t hot outside, it felt hot inside, because of Maera’s colors.  And, when it was hot outside, it was hell in here.

Siuta sipped his disgusting lukewarm tea and relaxed.  He wasn’t wrong to have complained.  She wasn’t wrong to have misunderstood.  But then, during a commercial for taking a dream vacation, with young couples chasing each other on the beach, and tanned young arms hugging over the pale waistline of a bikini as underwater flashed on the camera, Maera threw her arm, knocked the tea, and clawed into his palm.  Siuta shouted.  His wife set her teeth as the camera raised and panned over a vast, green ocean that promised paradise.

Siuta was aware that he had been doing this since boyhood, and was still doing it—he’d react to the sight of a beach, or any stretch of clear water, by first scanning its surface for the thrill of a shark’s fin piercing it.  Maera, digging nails into the clear skin of his hand, was the shark coming up.  She knew that he’d been looking for her.  It was his fault, for taunting her to come these last twenty-five years.  Cruel, savage sea-monster.  For her seduce him once upon a time ago, with sweat and the waggle of her body, back when her skin wasn’t so rough.  Before she’d gone so gray.  He’d fallen right in, ended his bachelorhood and believed her fast, salty lies.

“A woman can love a man, Siuta, and it’d be simply fun, a relief.  Look at me, feel all over me and know that I would relieve you.” Catch and stay by her, wade a little as she circles.  She needs you, even to eat you.  That is just a man and a woman, then a wedding, the natural way of things.  Then, she said, “I’d tell you to grow some balls and ask me it already, but I can feel, now, that you’re partway there…” Maera laid down for him, but she was not really under him.

Siuta shouted at his wife today, “Well! We are not playing around now, anymore, are we?” And then, he simply overpowered her.  There was the thrill of sex again, after so long—finally, it felt he was the true alpha between them.  Fara had been conceived out of her mother’s demand for a child, they both understood that.  And Maera wouldn’t have a son for him, either.

Siuta was not in love with his wife anymore, no.  His clothes were on, and hers had to stay on now too.  But, the hot, freeing rage was back.  They had been armwrestling the sugar vessel, and Siuta reversed Maera’s grip.  He forced her down at the shoulder, like a cow—it was how she was built—and then he used his other hand to spread out his wife’s fingers.

Maera licked her teeth with the edge of her tongue, submissive, or in too much pain?  Tentative to the scream that would get the neighbors through their walls and make him angriest.  Enough to break her fingers before anyone could get by her side.  It felt as if he were already doing it.

Siuta took the sugar out of Maera’s hand.  “Look at it, look what you are always taking from me.” He scratched the thick, clear skin of her hand with his dull fingernail.  “And it’s still all there, since I was twenty-two.”  Siuta was convinced of it, Maera grunted and snuffed like a beast, exactly as he imagined she would.  He took the toothpick from behind his ear and began to test the thick, clear skin of Maera’s own palm.  He began to peel it up.  No blood came, yet.  And then he could see it, he could see what she’d taken from his apartment back then, after he first promised.  She’d gorged on him and then turned in that beautiful space he rented with his own good money.  She crashed through his blinking, shining silver things and ingested the most precious charm, the totem round which his young soul had been fixed.

Siuta began to pry the tear in the skin further open, scratching with his dull fingernail.  Maera threw her other arm out, kicked him under the table.

“My old Playboy fold-out is still in there with you, isn’t she?  Jess Dane, over-my-desk Jessie, the first thing you demanded be thrown out…” And Siuta was serious. His wife’s hand began to bleed…