Sometimes when you’re writing or doing something else creative, you need to stop and take a break because you feel drained. I recently experienced a one-two knock out punch version of this.If a jet plane runs out of fuel, it can’t run. And you can’t just put anything in the tank because it’s a friggin jet plane. Maybe it’s even an Anti Stealth Radar Jet the Su-37/35 F-22 which is argued to be the most powerful jet plane in the world (at least when I just now Googled it)… but, to anyone who reads and wants to understand writers, or writers who seek to better understand themselves, [or, okay, okay, to the annoying people who never understand me >:-( ] it is a lot like that. You don’t just have any need, you have a specific writer’s need, and you need writer-food when you are spent.

I finally planned a vacaciones to have the time and energy to get that creative project done, but then I just happened to become bedridden right when it was time to buckle down… and then anger ontop of that just made me sicker. Now, I’m on the mend, bandaids where they poked and tested my arms and made sure I was okay (I am). But, when you’re an artist, especially if you’re a writer, you need to experience other really creative media — in fact, specific artworks that gel with your personality and your creative goals (because watching a million episodes of Futurama is nice, but it really doesn’t sing “fantasy fiction novel about talking horses” to me) so that you feel like you can do IT again. Not just any it, but YOUR IT. Jet engine fuel. None of the cheap stuff.

So, if you ever catch your writer friend sulking and you offer them a story of success about some other writer as a pick me up while they’re hugging their huge purple stuffed hammerhead shark and mumbling to themselves while watching Futurama… this is why they may try to make cramped finger-talons, snarl and take your head off. Well only some of us homo scriptors can be aggressive when poked… The End.

So, back to the story. Last month, way before I got sick, I went to Otakon (use godvoice), a humongous anime/ japanese pop culture convention in Baltimore, Md. to get my batteries recharged. I went to my first con in college, up in Boston–hilariously geeky story about that by the way, I have to diverge again and tell it…

Once Upon a Time…

The girls in the college anime club I was in were so dorky that they claimed (yes, were were all on the First Class message board) that they couldn’t attend the day I offered to go, so I went on my own. Yes, I went to my first anime convention all alone, so weird, and then… only to meet them as I was leaving and they came strolling in, in one big geeky posse. And They Lived Happily Ever After.

I mean… omg who does that? And who remembers that almost a decade later? 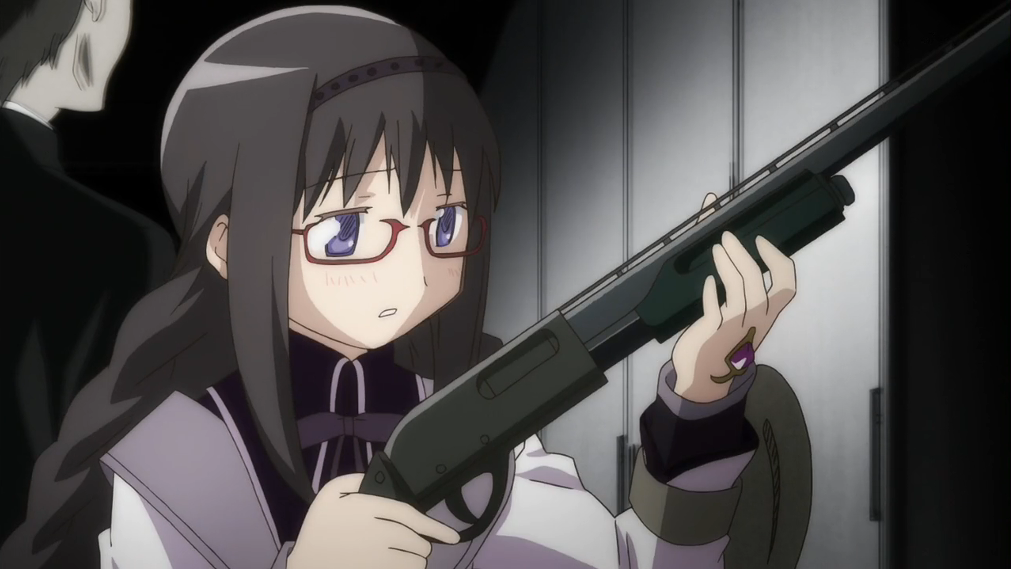 Guess I’m worse then, because I was the victim of it and I’m blogging about it now of all things…

Haha — but it was wonderful. I’d never experienced cosplay before, and there were some anime shows out there then I was aware of and were still popular and being featured at the con. But, so many years later, now in Baltimore, and at one of the biggest anime cons out there, I had no idea what to expect. Well, I did expect to go in feeling hella’ dated.

Madoka Nebula: It Was the Gateway AMV

At an amv (anime music video) competition we got to sit down, movie theater style and watch tons of fan-made footage of fans’ favorite anime scenes re-cut to tell a story against their favorite songs — you could hook up Escaflowne to “Amish Paradise” if you wanted or something. Well, I’m old, so that’s what I’ve come up with, but the two amv’s that spoke the most to my inner creative woman-girl-child were first, “Ship Happens” (It really spoke to my inner Xena-loving, pink wig wearing fangirl. Pretty sure at one point after watching, I battlecried, “We may not be canon, but I’m shipping it!” before calling a guy). Second, scenes of Puella Magi Madoka Magica spliced against Bjork’s “Crystalline” in “Madoka Nebula” hooked me by the beltloop of my black cutoff shorts and yanked me teeth-first into the convention center linoleum.

I at first turned up my nose at yet another scenario where school girls in super short skirts gained magical powers and wore silly costumes to triumph against ridiculous odds which wouldn’t help them or any girl watching later on in life (hey, I said it), but then, I watched these magical girls get pummeled, then get really, super pummeled. Then, die and stay dead. And then, midway through, with completely serious faces, pulled out guns on each other and have intense life or death gun battles for the sake of their craft. And ontop of that, the artwork was so creative and disturbing… witches’ lairs made of Picassos… the artist who created the story didn’t say “Girls are cute, let’s capitalize on that.” At least as far as the animated series is concerned, Gen Urobuchi (Gen is truly outrageous) and others must have said something more like, “Young girls are really vulnerable and really emotionally intense. Let’s show how beautiful and cruel they can be when given the chance against our really tough world. That vulnerability will be their greatest strength.”

I don’t know if anybody here wants me to spoil the series, but if you intend to check it out yourself, skip to the next paragraph. So, in a nutshell, realizing that she and her friends are just being farmed by a deceptively cute outer-space cat for their rare intense energy (being young girls) Madoka decides to save all her witch-slaying friends who’ve sold their souls to the cat Kyubey from ultimately having their souls corrupted and becoming witches themselves. And so, the cycle would have continued, magical girls becoming witches, demanding more magical girls, if not for the shyest of the bunch. The meanest, shadiest pretty girl turns out to be the most damaged emotionally -and- the most loving, and yes, as I yelled at the computer screen over Hulu blaring out the anime’s theme song on countless nights, that damned cute cat Kyubey was, of course, so evil. Well, ultimately, the cat was redeemed somewhat, but, hell, I’m thirty, I don’t be trustin’ people like that after so much drama…

Um, so yes, that was a great recharge, that Madoka Magica show with the supa-pretteh long name! After the amv awakening and the Hulu marathon, to better understand the roots of these kinds of stories about young girls getting magical powers, you know, what drives the writers to dream up these things in the first place besides their imaginations and daily lives, I tried (because I’d missed out on) watching Sailor Moon, because from what I’d heard, the storyline was similar. Well, wow, the two shows are in fact shockingly similar in some ways, which probably isn’t surprising considering how big Sailor Moon was/is. In the same way that the show FRIENDS was so good when it first came out, other networks came up with shows like Buddies and Pals which sucked, but the storyline or theme made other writers want to try their hand at that kind of thing too. I don’t know that manga writers/anime TV show creators are as profit driven as network television show creators, but, essentially, once a story is out there, it’s a part of our culture, right? And so, we don’t ever create in a void, do we?

Well, I discovered that Sailor Moon had a magical cat, that she was a schoolgirl, and she gained a ridiculously cute outfit after she transformed. She battled evil. She had a double life… there’s probably more. But, the tone was really… just two-dimensional. It’s very fun and entertaining, and later seasons probably deepen the storylines and characters quite a bit, but Madoka Magica was that dark horse right out of the gate. It felt almost to me as if the writer(s) of Madoka Magica said, “Fine. Here you go, it’s a story about school girls who use magic up front. But that cat is evil, he’s going to fuck up their lives and they are even going to get so angry, so hurt that they try killing their friends.” The girls even suffer what looks to me like PTSD in some scenes. No joke. And the fact that they can’t tell their parents and are sneaking out at night to risk their lives and save the town really hurts them… and their parents too. So, it’s more real in your face like Buffy the Vampire Slayer than it is like… I don’t know, Jem and the Holograms.

Is a Male Protagonist Always Needed, Though? (I mean, if they can leave us out…)

Nor did Madoka Magica have nor need a male protagonist secretly propping up the storyline providing masculinity or male access (impressive when Urobuchi is a guy, not that he couldn’t but he obviously went out of his way to do so) to the goings-on with the female characters. Nobody seemed to be afraid that these girls weren’t “man enough” to be as violent, as strong, as capable as a show this good would have to call for. Well, whatever “man enough” means when violence and strength aren’t inherently male, just like being passive or weak isn’t inherently female; they’re just themes. And, the writers never ever did need a male protagonist. They had enough male people in the story not to pop us out of reality. But, some people out there seem to feel uncomfortable if they don’t see men on the screen, in a novel, or maybe just TV producers and book publishers do; I’m no expert. There was a love interest that was unrequited, but in a real way that affected character development and the story line. Not in a stupid, let-me-throw-a-rose-and-validate-your-insecure-ass-when-you’re-already-supposed-to-be-Sailor-Moon-for-Christ’s-Sake way.

Wow, some Sailor Moon fangirls are gonna rip me a new one. *Sigh* you might as well then, because I need more readers anyway. And, you can learn me sumpin’ about how the whole series turned out, since I didn’t get very far before getting my feelings hurt.

Well, at the end of my experience, I felt like Bugs Bunny put a horseshoe in his boxing glove and slapped Sailor Moon in the face, the contrasts and allusions were so sharp. Was that done intentionally by the writers? And, I found a story exactly as thrilling and punch-in-the-face as I need mine to be when I sit down to write again.

Finally, I am really excited for the next generation of writers. Women writers, especially, since I’m a woman myself and we do need an even bigger voice, more diversity, more, more, more of everything coming from our women writers. But men and people of other gender identities too… all of humanity (of course, to me everything is so grand and sweeping, life just is). Because I grew up with Sailor Moon, at least an awareness of her in my culture that influenced me, and look how pissed I am. Or, possibly, how pissed the writers of Madoka Magica got. But all these other kids are growing up with really meaningful she-power stories like Madoka Magica. What will they write when they grow up? I mean, Madoka practically Jesus’d for them.

Also, I wanna cosplay as Homura at some point. (More spoilers)

Well, what do you think? Is Madoka Magica or Sailor Moon better? Or, do we have no business even racing two femme-empowering shows, per High Priestess Hillary Clinton?

Images from the Madoka Magica wiki.