Did you know that even some of nature’s greatest and solitary beasts will come together in times of distress?  The Bald Eagle is an example.  Normally solitary when not part of a mated pair, bald eagles will defend territories and are unafraid of fighting showy aerial battles over a stolen fish-catch.  But, if there is a shortage of prey or harsh weather conditions, bald eagles will roost together looking very stern in their white caps, but generally tolerant of one another. 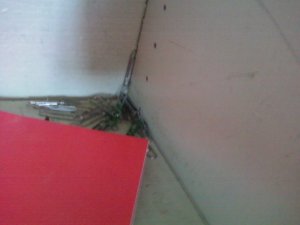 In hard times, paperclips can even congregate in the most foreign and dangerous environment for wild office supplies: elementary school closets prone to grubby mini-fingers, if not summer-break cleaning!

Curiously, paperclips more closely define the American way of life (being physically inserted or fastened to the very paperwork that structures it).  Though, paperclips don’t enjoy the same symbolic reputation as bald eagles.

All this is to prepare you for what our photag Valerie finally reported in, when her health improved:

The Stripey-Link Clan was tracked indoors–we presume they were most desperately motivated to escape DC’s 100 degree temperatures last week.  A thorough search of the building (the Stripeys selected a mostly desolate elementary school of all places, such brave little ones!) was necessary to find them, because their incredibly tiny tracks were hard to spy on the carpets.  And then, wherever Valerie did discover silvery forms huddling together in the air-conditioning to hide and chew with fervor on old stacks of graded mathematics exams and foreboding, crackling-pink detention slips, these were not the same sweet clip-creatures we’d become so familiar with in the past couple of weeks. 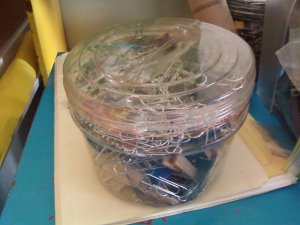 As you can see, the conditions of a true paperclip safari are dangerous for office supply hunters as well as the hunted.  These days, Valerie limps along with shorn off shoe-laces from Titan’s attack and many small, oblong bruises on legs and arms bared to DC heat.  And worse, whenever the wild paperclips are discovered by a school teacher determined to finish her classroom cleaning for the summer break, they are promptly gathered up to reside in tightly-closed plastic bins, as pictured.

Valerie spoke to one of the teachers engaged in this practice, who told us, “I am amazed at the ability of the paperclips to seem new-like after so many years.  And they were very agreeable when I put them in boxes.”  The school teacher wishes only to be known as The Paperclip Saver.

To that… I don’t really know what to say to that.  I guess the paperclips either enjoy being contained, according to this first-hand account by the mysterious The Paperclip Saver… Or, the paperclips must experience such undue stress in the summertime as they cannot effectively communicate to human beings with their tinny, unheard voices?

Another remarkable possibility:  suppose all the paperclips we meet aren’t pawns in some national black-market office supply scheme.  Could it be that paperclips migrate from the wild and into our homes and work cubicles, or lie in wait below our desk-chairs to be plucked up and stowed safely away until some rainy season returns?  And if paperclips can, in fact, survive in air-tight containers, then perhaps they are adapted to hibernate or else enjoy a periodic airless, submersible state seen in some species of whale that can go without surfacing, for hours?  That such close similarities should be found, so far across the animal kingdom!

Without more opportunities to observe the Stripey Link Clan long-term, we may never know.  Valerie believes our particular beloved metal friends are captured within this very container.  Unfortunately, the Stripey Links are difficult to spot from all the others.  We hope that Strawberry, her young cubs, and the two adopted, colorful rogues can one day be reunited with their lost Silverback, Titan.

And if, as do some species, this prominent, clear plastic container is also an ancient migratory rendezvous point within the building–this may very well be!

I should also note that Valerie has refused to go on any more safaris for Randitty until we can actually pay her.  So, it will be necessary to let them stay packed in The Paperclip Saver’s container, for now.  Or, I guess just could go buy another handful of paperclips and try to pawn those off as the originals… but, alas!  When we still know so little about paperclip-hibernation, in the eyes of the great conservation community, that would only make me a part of the problem.