Anyone else notice that you can’t ever tell the age of a paper clip? Well, first you might think, ‘Um, new-paper-clip is shiny. And old ones get all dark and rusty, don’t they?’
Well, maybe.

When I was a kid, I worked at the library of my elementary school. Sometimes I handled old cards from the catalogs or papers that had paper clips attached to them. They weren’t always black and dull-looking. This makes sense because metal needs water or air–weather–to rust it, correct? Sitting around in a stagnant card catalog shelf all day long won’t do that to a paper clip. Your standard, silver, tiny thing does what it is made to do, for as long as it can stand, like a brave soldier. Or like those steel cars made in the 50s that could last forever before manufacturers realized that they needed to break things to make things–depreciation, that is. Most products today are made to wear down after a while so that the manufacturer can sell you a new one and make even more money. But paper clips don’t suffer from this fate; they look good and clip well for years and years, unless you leave them out in the rain, or bend them to play at picking a peanut-sized closet door lock as a kid.

How in the heck do the paper clip people keep making their money, then? 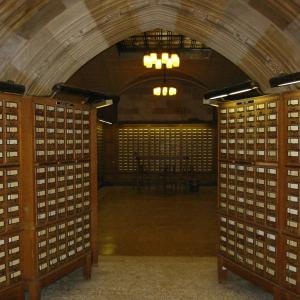 A herd of card catalogs in their natural habitat:  The 90s.

Because small things tend to get lost and then you have to buy more of them. Lost paper clips end up hanging out at the same smoke-filled, hole-in-the-wall bars that single-socks, the old remote control, uncirculated pennies, and the backs of your earrings waste away their final years in. They chat together at a rickety table with cloth sock-puppet mouths and soft clickless worn ‘play’ buttons about the good old days when single-sock had a wife and grandkids even, and crusty Earringback saw Marion Barry (Why him? Well, because he’s nearly everywhere you don’t expect him to be in DC) that time in the mall parking lot. Earringback swears up and down that she saw the local celebrity. But till this day, she’s not sure because at the last moment, her wearer shrugged parcels higher up into her arms, causing snooty shoulder to brush that slippery ear, who only apologized like a wimp before the car-door slammed. Then, suddenly, Earringback was lost and alone between chips of black, summer-hot gravel. Reflecting the sun in tiny star-points, and blinding people from far away like a lost treasure beneath the dark ocean was fun, for a time. Before rain eventually came and inevitable rust…

And so Earringback ended up at the Paper Clip Bar. A dark but kind place where ‘everybody knows her name’ and where deferred dreams also go when they’re too lazy and dejected to explode… The paper clips are still fine and shiny, though. I’m fairly sure that they even run the joint. Ageless silver behind the bar, full of guile as they mix drinks, maybe even bitter about their, well, bittersweet success. If success in an afterlife sort of place can really even be called that. You see, for an unblemished immortal god of the office supply world to have its life cut short simply because it slipped off of the paper it was binding so proudly for so long…

Or, was it no accident? If paper clips cannot age, then deterioration of any kind, even a rusty non-death, must be voluntary. A paper clip chooses to cease working in a final, desperate moment. One would think that it has no reason to give up because it has a small life, and a simple one–don’t we all?–but over time it allows itself to become overwhelmed, regardless. Therefore, the greatest shame of a paper clip must be to lose its singular purpose. When a paper clip ceases clipping, that is, refutes its very existence by rejecting paper so absolutely, it falls away to the carpet. In denying itself, it is excommunicated by the laws of its tinny nature to a dark world of ignominy. A personal, and very preventable, cheap hell. I say cheap, because paper clips don’t really cost all that much.

And so then, an old and lost paper clip may not age or lose its shine over the years, but it can lose its heart and soul if it ever gives in to those things that will always pull at it, and at all of us in this life: a broken heart perhaps, financial hardship, gravity…

Wait, what was the point of this entry again?

Oh, we may never know. But just to be safe, don’t give up on yourself. Specifically, I need you to stay inside of your office or home; don’t go out for fresh air or into the rain or expose yourself to the elements, like at all. Avoid rust at all costs. Also, don’t let go of that piece of paper you have there between your fingers! EVER.