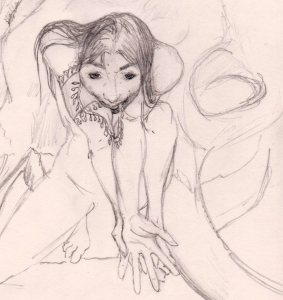 The thunder bellowed and snapped. Angry wind tore out of the sky and uprooted trees. The lake swelled and flooded in the lowlands. Those were the reports the Elphanti rangers brought King Balim. Prince Zyrcon stood beside his father, head bowed before Aisha’s dressed corpse. His mother, Queen Alypsa frowned under her black raven feather headdress. The entire royal family wore linen robes dyed as black as Zyrcon’s hair.

There was no music. The elephants associated drums with dancing and celebration and it would be foolish to upset them now. One by one, the long procession of stalwart warriors rode his mare inside the heart of the mountain, into the throne room. All the elephants in the army were allowed to take as much time as they needed to mourn. What the animals thought, especially in a time like this was tantamount. King Balim parted just before Aisha’s mother came. Zyrcon remembered that his father’s eyes were wet when he turned to leave. Zyrcon’s head hung back, lolled to the side as he watched his father in a daze. The King did not comfort his son, not once.

“As her rider, I extend my condolences…” Zyrcon tried to say, but he was overcome with emotion.

Stoneheart curled her trunk under her chin as if she were drinking water. The beast looked nervous. Darthud, Stoneheart’s rider leaned over in the saddle and patted his mare. Then, Rider Darthud looked down his nose at Zyrcon. He sneered.

“She’s too upset for your words, can’t you see?”

Prince Zyrcon looked up at his mother. The Queen blinked but stared straight ahead as if she were by herself.

“And for what? Because you had to touch yourself!” Darthud’s voice rang out and echoed off the walls. The thunder gathered in the distance. Each clap of thunder and lightning came more quickly. The storm was coming to a head over the mountain itself. The other riders sat erect atop their mares. Though they looked like steel, some of their faces were pale or completely drained of emotion.

No one was surprised at Darthud’s words. The whole village knew why Zyrcon had not been there for Aisha when the assassin came.

“You will be king. You will be King!” Darthud shouted over Stoneheart. She lowered her trunk and caressed her dead daughter’s little head.

“Have you no shame? Have you no pride? You must outgrow your uselessness and embrace manhood the right way. And how will you even do that now? With no elephant to ride, and the great Bul’dirin lost in his death throes as we speak. And who shall replace him? A babe… just a little baby to contend with the other animal spirits. Her afterlife will be torture, Zyrcon.” Then Darthud wept.

Prince Zyrcon wringed his hands behind his back.

“My beautiful daughter is not through with you yet, Zyrcon.” Darthud spoke with his eyes closed. The anger had been pushed out of his voice and he sounded gentle, forgiving. It was Stoneheart talking. “Think of her in everything that you do. Perhaps the soul link you established with her before she left this world will give her some comfort.”

“A babe! Just a babe to contend with the crocodiles and the jaguar!” Darthud suddenly burst forth through his own channeling of the elephant’s voice.

“Be at peace, Darthud!” Stoneheart’s inner voice had a unique tone. The difference between herself and her rider was unmistakable. Zyrcon would have been able to speak with Aisha’s inner voice as well, with time. But he’d had only one vision. That was not enough to know her voice and her heart.

Stoneheart continued, “Aisha was delighted by you. She will not stop loving you from beyond the firmament. Nor will I. When Bul’dirin calms, she will be a full spirit, and the luck of fate will rest with her. I believe that she has good memories of you to guide her, and that her soul will be at rest.” Stoneheart swung her trunk up and Zyrcon hopped back a step. One wasn’t raised around elephants without learning to avoid trunks at all costs. The black trunk rested on Zyrcon’s shoulder though, wrapped around the back of his neck and stroked his hair. It was like the mare had done with Aisha countless times.

People around the room started mumbling. Queen Alypsa flinched and looked at Stoneheart in shock.

“Words too kind for my son—” she began to object humbly.

“And Aisha forgives you as well.” Darthud said with Stoneheart’s voice. The strong mare, still big with her baby weight backed away from the casket of her daughter then. Then she walked away.

“A queen like I am… you thank her, Zyrcon. Stoneheart has saved your life this day.” His mother told him.

Zyrcon did thank the mare. Darthud put a hand on his hip and lilted as Stoneheart’s shoulders roved under him. His wild ponytail swayed but he would not turn his head to acknowledge the prince. Across the throne room, Tun’rilly greeted Darthud silently when he pulled his mount up next to hers.

The room hushed and even the thunder subsided when Bul’moann entered the room. Zyrcon’s father rode the bull elephant majestically. The king bent the elbow of one arm, fist to hip. With the other, he held the spear of Elphanti. The long ivory pike had been carved from the tusk of the first bull and sire of the entire royal herd, Bul’von. He was the patriarch of this herd, and his great grandson was now the bearer of the spear. There were other sons but they lived in bachelor herds at the base of the mountain and were not destined to breed. Bul’moann had been the most powerful, the most fierce. He was the one meant to die one day in the ritual war ceremony of the cosmos, not little Aisha. Now fate itself was upset.

“Aisha, little daughter of this tribe. I beg that your spirit not wrest in its grave. All of us here, riders and elephants loved you deeply. We cherish you. It grieves us, it pains us and alarms us that someone would come to the sacred mountain and kill a fate-beast! We will find your murderer, and the world will know justice again. I also ask that you show mercy towards my son. I know that he loved you as well.” Then, King Balim covered his face with his hand. His confident stature wilted and his shoulders shook. His high ponytail fell over his arm. His other hand trembled, and it seemed that the spear of Elphanti would crash to the floor and break, but the King forced his grasp to be firm, though Bul’moann was not so strong.

“Aisha.” Bul’moann’s voice rolled deep up from King Balim’s throat and was full with passion. It was exactly opposite of his father’s thunder, hollow and sad. “My daughter, I loved you. I lived each day proud to know that I would give my life for you in the arena. I rejoiced in the day that I would become a great spirit and guide the Elphanti. My tusks were ready for the fight. But you… you have gone before me, and my heart aches for you, my littlest daughter, daughter of everyone in the Elphanti.” Then, Zyrcon’s father wept. It was a strange thing to see because his father never cried. Zyrcon had to remind himself that it was Bul’moann crying. That was not any more comforting, that the bull elephant himself should cry.

“The crocodile will try to rip you apart. Stay out of his water. The Ibis will harry you to no end. Fear and honor the Ibis, for it is the only way you will keep yourself. The dolphin will tease you, but my dearest, take heart. The silverback will try to beat you… oh so horrible! That I should tell my own daughter to accept the beatings. But you cannot avoid it, Aisha. You were not meant to rule as I was. You were not bred to bear the burden of the war of fate, the Celestial War. Oh, my heart aches for you little one. But you must find a way to be strong like your mother. Be strong and remember that she is still here in this world, with myself and your aunties… please do not let the anger of your situation consume you and then take revenge on us. Please be as strong as Bul’dirin when you wake again in the new life. I do not know what else to say…” Bul’moann faltered.

King Balim straightened again. His tear-stained face was calm and hard. He looked at his son finally.

Zyrcon would remember that desolate look for the rest of his life.

“I know what to say. I know what must be done.” King Balim said to Bul’moann.

“Huptha!” he commanded and tossed his head back. He thrust his hands upward, stretched his arms to the sky. Lightning struck then, and thunder cracked directly over head. The white carved spear of Elphanti drew the reflection of white lighting that struck outside in a flash from everywhere in the dark throne room. The riders tried to remain calm, tried not to be frightened by Bul’dirin’s death wrath. If they did not welcome it, they would offend the powerful elephant spirit and his living descendants.

Bul’moann obeyed his rider. He wrapped his trunk around the log handle of Aisha’s crypt basket. Then, he lifted her up from before the throne and took a long time turning himself around to face the door. Gold bangles around the bull’s large feet clanged loudly and competed with the thunder and lightning as he processed out with his daughter’s body. One by one, the other elephants followed in the order that they had come in.

When they were all gone, Queen Alypsa said to her son, “Come to me, Zyrcon.” And Zyrcon embraced his mother, free to cry like a boy at last.