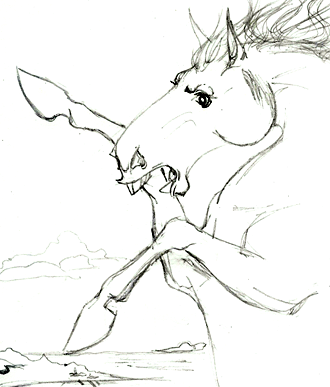 It was not long after Odentalis’ fall, Mi’Raah’s arrest, and King Baeltheon’s eleventh waif-Queen getting beheaded for demanding to keep her silver hair style after that tragic Feast of the Yearling, that beach-dancing was finally prohibited in Jyst.

The new Stricture was gladly enforced by the nobles who never wanted the Temple District to be overrun with soothsayers, conk-whisperers and prostitutes in the first place.  The high ladies, especially, made a practice of getting in their worship-day finest after sunset, riding down to hallowed Jyr Equus and forming a file of cavalry in front of The Temple of the Alpha Mater.

At the usual dancing hour, bowed women with the slightest rank of them all, walked up to the stone plaza from the beach.  They leaned from hunger, had resorted to selling off their silver ankle bells to help prevent it.  But it had done no good.  Their movements now really suffered from the kingdom’s disharmony.  They knelt and dipped their hands into the silver troughs left out for horses to drink from during the day, and forced mouthfuls of raw grain.  Painted noble-women waited up on their horses with fans-going in the night-heat and laughed at how the pregnant ones ate the hardest, truly looking and sounding like market sows.

White stone temples with rows of columns paired in knobbed fours like their animals’ fine legs stood all around, just as vacant and majestic.  Concerned only with grazing off the backs of the lowest of the low.

The real show would start when, in time, these shrouded women gained their courage and eventually put off their long robes to show tanned arms and legs, salt-dry lips and walk the streets.  How long did they dare take their chances before the noble ladies of that same country finished the game of giggling, and called on the Holy Riders?  How more terrible the occupation was now, without the freedom to at least cover it, with dance.

But, on this night, before the Temple of the Alpha Mater, one family of rustic women refused to eat like beasts and chose, instead, to kneel in a circle far from the gilded horse troughs.  Their Jystian betters with dyed silver hair since the Feast of the Yearling loosened shawls and guided the small cavalry in matching silk caparisons nearer–there was the other reason for the noblewomen constantly banding together, daring King Baeltheon to try beheading all the good women in the kingdom at once.

The smallest of the circle stood.  She took a gold bottle from her cloak, definitely got a final swig of liquid courage, then kept it in her right hand.   She shook hips in one cardinal direction, then stopped.

“My name is Weeli, and this is not a dance.”

“But if it looks good, sugar-meat, we won’t call the Holy Riders for an inquest!” one fancy woman up on her horse whistled hard, like a man, to scandalized laughter.

The kneeling women remained solemn, and focused on Weeli.  “Cruelty, still?  Haven’t we been lowered enough, having to eat after the horses in this land?  Someone, hand me a dagger so that I can finally end it!”

One of her sisters did so.

Weeli held out her hand, with the bottle, placed the knife edge over that wrist, grit her teeth… but she did not die.  It was not a dance, as promised, but an act of desperation.

This littlest woman points weapon at herself.   Her open breast longs for the blade.  Her far fist takes it away.  Feet shuffle the desperate chase, in thirsty circle.  As she turns, the island feels like it is turning, and the red, fading sky above dizzies like a checkered-board.

A game filled with knight-pieces, proud little stone horses with coiled necks.  Nowhere to go now, except move on and then collapse sloppy-right.  The way Odentalis fell.  Or, left, the way Baeltheon’s eleventh waif-Queen’s head rolled happily down from the guillotine.  Because the Queen of Jyst herself liked Mi’Raah’s silver hairstyle, refused to change it.  So stupid.  Or, was her ended life a worse waste?  Such a round argument and pointless…

This littlest woman still chases the knife, as she begs for this ridiculous worship to end on one side of herself, but the other, the right side, continues to stretch arm and lead away.  This is the liquid side of a person Mi’Raah once assured pressed powder could make-over, forever, to transcend beyond suffering, during her Spiritual Make Over Worship Series…

“Look at me!  I am called Disciple Weeli.  I do not dance on this island and its foolish laws.  I have a baby to feed, I have a husband whose horse was seized after the solstice and that damnable law!  He cannot work because these same laws, years before, have said, for the sand on his feet, he is unclean, unable to enter any respectable house inland… And this, after working by those laws, and on the lonely beaches, earning for a lifetime to earn the right to buy one horse!  And now I cannot work either, because we women are forbidden to dance.  So here I am, Disciple Weeli, poor again, winding ankles, instead, on the Sea.  This island happens to be in the way of the Sea’s raging waters, in the way of my life!” Here, Weeli fully rocked hips still swollen from child-rearing, “…For High Priestess Naah Maah Mi’Raah teaches, even from her enforced silence in oily King Baeltheon’s dungeons, that water and life can never be bound!”

Tambourines were also forbidden, so the seated women kept clapping their hands.  Some of the young men used to being out in Jyr Equus at that time of night had real wolf-whistling soaring over the rythm, to make a sudden melody.  Then, beneath so many offended noble ladies now fully regretting their curiosity, fat-bellied, pure-bred Jystian mares began to stamp hooves back and forth and toss heads to do what they had been trained at on worship-days in that same hallowed plaza.  Horse-dancing.

More scraggly beach women hastened through the crowd once it was really going good, with opened kerchiefs.  They got twice as much gold as before, from a surprised, hard-laughing crowd.  One could hear all that money jingling, part of the music.  That is what finally brought the Holy Riders.  The noble women saw the ruse for what it was, then screamed that law-breaking was going on.

Beach women scattered, by orchestra.  The noblewomen’s horses caught the instinct, to run.  The Holy Riders arrived and their mounts were confused too.   The animals chased down the poor and rich alike.  Snatched anyone they could by the silver hair with big horse teeth.  The Holy Riders, their capes flaring red in the darkness, had a real time of it, with no saddles or bridles to control their mounts.  There was no choice left, in the heat of fighting, but to shear long, bright hair with swords, and prevent crazed horses from snapping important, bejeweled necks.  But, on that night, many entrapped people did get bones broken anyway, thrown from animals, or trampled beneath golden hooves.

And no matter what laws there may be, the stink of carnage offends everyone.

Weeli could not read nor write.  While the other women in her cave watched by firelight, the little woman kissed a fine-writ paper scroll then put it back inside of a gold bottle.  A breeze came and blew over the shimmering glass-neck to sing out its message again:

I, too, am a follower of the High Priestess of the Sea.  Aid me in saving her from the evil King Baeltheon by redeeming her message before those heretics on the island.  Once you save her, in spirit, I will know that you are with me, and worthy.  Then, it will not be much longer before I come down with sword and rescue the High Priestess, in body.  Together, we can end Jystian tyranny.

Do this for me, by delivering all their horses.

Weeli lifted her baby son onto one hip and held the gold bottle against herself, resting it in the crook of her arm on the other hip.  Outside in the night, horses of all colors and conformations were running wild on the beach, terrified by what was going on up in Jyr Equus.  The violence had spread to the other wealthy districts once people in the city were awakened and heard what the Holy Riders were doing.  These animals raced to the brinks of the island and found no reprieve from what they felt was upon them and still coming–a great predator, a terrible time.  Weeli waded out into the water as some of those animals were already starting to do.  Some horses were swimming away, or galloping for miles to the north bank where there was a shallow channel connecting the sister-island kingdom of Tryst.

The Beach Men held torches, ready to keep the horses away from their cave home.  Handsome Mirkaal had not smiled since the solstice.  He hugged an arm around his wife’s shoulder now.

Weeli set the uncorked bottle and its message back into the sea, watched it dunk as water streamed into it and bubbles frenzied out.  Then, it propelled away, against the night-tide.

“Will Arudelle truly come, Disciple Mirkaal?  I fear our women, and your wife especially, have gone mad to risk our necks!” Another of the haggard, torch-wielding men asked.

Mirkaal, who’d also become a target since Mi’Raah worked her first miracle on the couple, considered the dark horizon.  His discipleship might have also been due to Mi’Raah going into a happy fit about how nicely their two names matched.  This happened over sweet, cave-stilled moonshine at Weeli’s wedding feast weeks ago.

Unfortunately, when the condition of mortals is so bleak, as they had got in Jyst, even the smallest kindly act can be taken full advantage of, no matter the context.  “As Mi’Raah once proclaimed over golden drink,” Mirkaal spread his arms, “…as this gold bottle proclaims now, I am the only one who can know the answer.  And, I believe that this was all a test.  King Arudelle and his Black Armada are not the enemy.  He must have been her champion the month-long, waiting for a sign, proof of our devotion… but our faith was small, and Mi’Raah was seized by King Baeltheon, as a result.  It was necessary to go as swiftly as we did, tonight, to begin the process of atonement.  Brothers and sisters, we no longer have any choice to hide, for fear, in caves on the beaches.  Men and women should stand proud and together on this.”

Weeli agreed, “I am not going to chance a thing now by showing a dent in my faith, will you?”

“From horizon, to horizon, Mi’Raah.” they bowed heads and clasped trembling hands, as eager as the horses were afraid, for the wrath of King Arudelle.

Black ships with lanterns were nearer now than ever.  The Beach Men were hugged tight, then released by their women, to raise torches high, go running and shout.  The many fleet horses of Jyst were thus delivered to the Black Armada, chased into the waves.